Few things are worse than leaving your car for a bit and coming back to find a puddle of some unknown fluid beneath it. A fluid leak under a car is often the first sign of problems beneath the hood. And while many modern cars have a warning light to alert you if certain fluids are running low, you should always keep an eye out for your car leaking fluid, too. 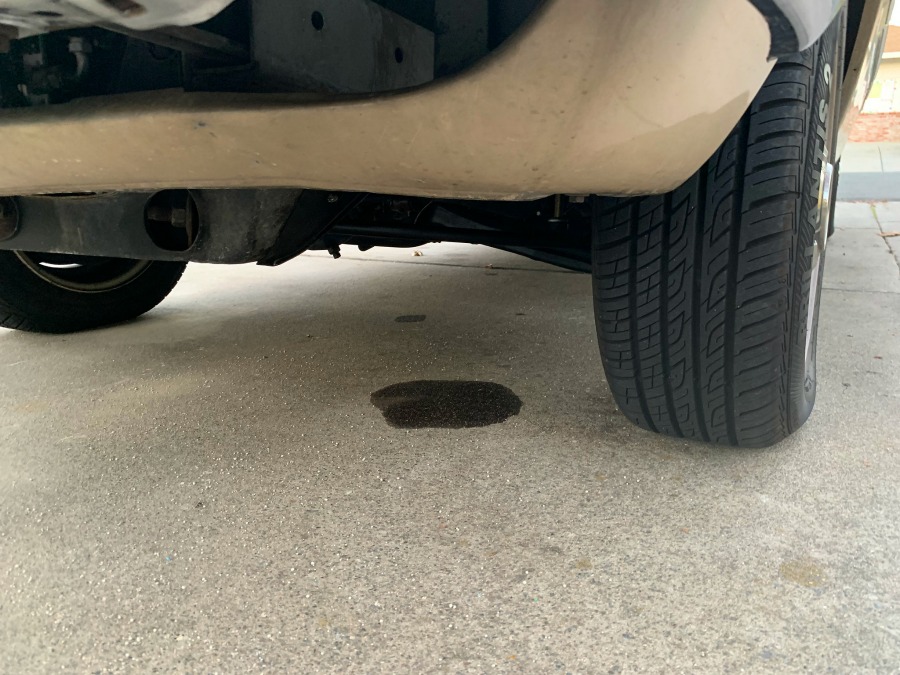 While fluids leaking from your car can range from more of an inconvenience such as a windshield wiper fluid leak to a potentially dangerous gas leak, being able to identify the fluid can help you discover potential problems before they turn into a costly repair bill. Here are some of the most common leaks that occur in cars including the color, consistency, smell, and location of the car fluids to help you determine what the problem is.

Transmission fluid leaks occur near the front or middle of the car, right beneath the transmission. The fluid has a lightish red color when it’s new and a dark red or brownish color when it is old. It has a slick and oily feel (thinner than engine oil) and smells like petroleum.

Do I Have a Brake Fluid Leak?

Another common car leaking fluid issue is a brake fluid leak. Similar to the power steering system, a car’s braking system also works on hydraulic pressure. Brake fluid is the hydraulic fluid that maintains that pressure. A brake fluid leak will cause a drop in pressure, which could possibly result in brake failure. So if you notice a leak, have your car towed to a mechanic immediately.

Brake fluid is clear to yellowish in color and has a medium thickness with a slightly oily feel. If you have a leak, you will usually notice it near the wheels or in the area directly under the brake pedal. 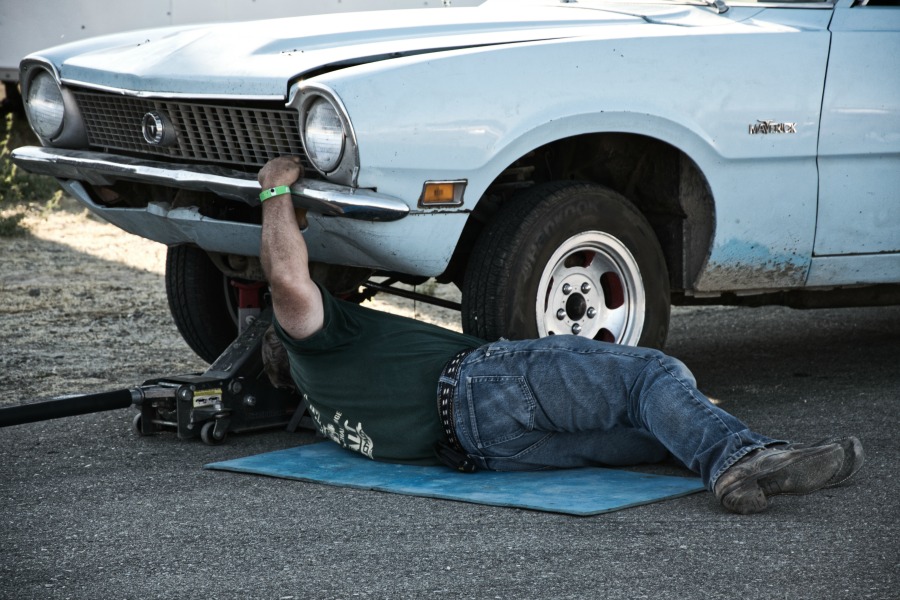 When it comes to your car leaking fluid, engine oil is yet another common culprit. An engine oil leak is a very serious matter as a low oil level can significantly damage the engine. Engine oil is golden or yellowish-brown when new, and tends to turn browner or even black the older it gets.  It has a very greasy and slick consistency and may also have a slightly acidic or gassy smell. When you have an oil leak, it’s is usually found directly under the engine.

However, because oil has a higher viscosity than other car fluids, it doesn’t typically form a large puddle as other fluids do. Instead, oil tends to seep through parts of the vehicle’s engine until enough of it gathers together to form a drop that has enough weight to drip onto the floor.

Additionally, oil leaks may burn off before hitting the ground emitting the odor of burning oil while you are driving. You may also notice oil on different engine parts under the hood before you see any drips on the floor.

Engine oil leaks can be caused by several different things. Sometimes it’s as simple as an improperly tightened oil plug or oil filter after an oil change. Other times it can be due to more serious issues such as the crankshaft and camshaft seals, a corroded oil coolant line, loose or leaking plugs or gaskets, high oil pressure, intake manifold issues, timing cover, or even a worn-out plug or gasket.

Getting all of the engine components working together all comes down to timing, and if the timing is even slightly off it can cause excessive wear, resulting in oil leaks.

If you notice oil leakage, have your vehicle towed to a mechanic to have it checked out and repaired immediately.

Antifreeze, or coolant, is what regulates the temperature in your vehicle’s engine. If a coolant leak occurs and is left unchecked, it can cause your engine to overheat and die. In fact, loss of coolant is one of the top causes of serious engine damage.

Antifreeze can be pink, blue, or bright orange in color, although the most common color is bright green. The fluid has a slightly sticky, viscous feel and a sweetish smell. Unfortunately, that sweet smell also makes it very tempting to our cats and dogs, and since it is highly toxic to animals you want to keep them away from any possible leak.

Gas leaks are pretty easy to identify. Basically, if the puddle in your garage smells like gas, then it’s probably gas. Now just because you have a fuel leak, it doesn’t necessarily mean that an explosion is impending. However, it’s definitely an issue that needs to be checked out as soon as possible.

A gas leak can be the result of several different issues and locations. If you see a puddle of gas near the rear of the car, it possible there’s a leak in the tank. If the puddle is near the front, it can indicate a problem with your fuel pump. In addition, the fuel lines can also be a source of the leak.

If you notice your car leaking fluid, the culprit could be washer fluid. Windshield wiper fluid is usually blue, but it can sometimes be green or orange. It’s really thin and feels almost like water. Any leak will usually be under the front right side of your hood

Water Leaking Under Your Car

If it’s hot outside and you’ve been running the ac, don’t freak out if you see your car leaking fluid that resembles water, because chances are it is water. Believe it or not, the one leak that causes people to freak out the most isn’t actually a leak. It’s just water condensation from the air conditioner steadily dripping off and forming a small pool or stream beneath your car.

How to Check Your Car for a Fluid Leak

Finding a puddle of fluid under your car on your driveway, garage floor, or parking spot, is likely a sign of a leak. If you aren’t exactly sure about the location it’s coming from or how much is leaking, place a large piece of cardboard under your vehicle when you park it for the night. Check the cardboard the next day to determine the color, the general area it came from, and how much has leaked out. You can then share this information with your mechanic so that he or she can quickly and easily identify the fluid and where it’s coming from.

If you see your car leaking fluid, knowing how to identify the fluid that’s possibly leaking is an important skill for any car owner. Make a habit of routinely checking for possible leaks and always be aware of any drips, drizzles, or puddles around where you regularly park your car. If you find one, have a qualified mechanic diagnose the leak and fix the problem.