Filled with shrimp, crawfish, sausage, corn, and potatoes, then seasoned with Cajun seasoning, these easy Cajun Seafood Boil Foil Packets are packed full of flavor and have just the right amount of heat. Best of all, they’re an easy-to-make and easy-to-clean meal!

Seafood boils are one of the hallmarks of a Southern summer. They’re lots of fun, often messy, and always packed full of flavor!

However, a traditional seafood boil calls for cooking the ingredients in a gigantic pot outdoors, then dumping the cooked food out onto a newspaper-covered table for everyone to dig in. It also calls for a lot of ingredients and clean-up.

Wanting to enjoy that same seafood boil flavor on a smaller (and less messy) scale, I found another way to get that amazing taste — foil packets!

Y’all, this grilled Cajun Seafood Boil Foil Packets recipe keeps all the fun and tasty parts of a seafood boil without the need for large amounts of ingredients and a ginormous pot.

It’s incredibly easy-to-make and calls for very little prep and even less clean-up.

Another great thing about these foil packets is that you can make them ahead of time, put them in an airtight container, and refrigerate until you’re ready to grill!

This Cajun Seafood Boil Foil Packets recipe is sure to become a summertime fav!

Making Cajun Seafood Boil Foil Packets is easy summer cooking at its best! You get all the big flavor of a seafood boil without all the mess!

With very little prep work, it pretty much boils down to combining the ingredients in a large bowl, seasoning them, dividing them into foil packets, and then tossing them on the grill.

You’ll find the printable copy of this recipe with full ingredient amounts and instructions at the bottom of this post.

Disclosure: This blog post contains affiliate links for products I think you’ll like. If you make a purchase from one of these links, Bullock’s Buzz will make a small commission at no additional cost to you. All products that I recommend are ones that I have (or have had), use, and love.

Packed with tons of flavor and just the right amount of heat, Cajun Seafood Boil Packets are a full meal in themselves. Each packet contains shrimp, Andouille sausage, crawfish tails, corn on the cob, and baby red potatoes.

What Type of Sausage Should I Use for a Cajun Seafood Boil?

How to Make Cajun Seafood Foil Packets in the Oven

How to Cook Seafood Boil Foil Packets on the Grill

How Do I Avoid Overcooking the Shrimp?

Whichever way you decide to cook these seafood packets, remember that shrimp will cook quickly. To avoid overcooking, place the shrimp on top of the rest of the ingredients before you close the packets. Then, once they’re on the grill, keep an eye on them to ensure they don’t overcook.

How to Store and Reheat Seafood Boil Packets

While these seafood foil packets are best enjoyed the day they’re made, any leftovers can easily be saved for a day or two.

To Store: place any leftovers in an airtight storage container in the refrigerator for up to 2 days.

To Reheat: gently reheat the leftovers in the microwave (not in foil). I personally prefer to keep the shrimp separate as they tend to dry out easily when reheated. So I’ll serve them chilled or at room temperature instead.

This recipe can also be used for campfire cooking! You’ll follow the same instructions as you would if cooking on the grill. Just remember, the potatoes will take longer than the other ingredients, so either pre-boil them a tad or cut them into smaller pieces!

Looking for more easy and delicious grilled recipes? Check out these: 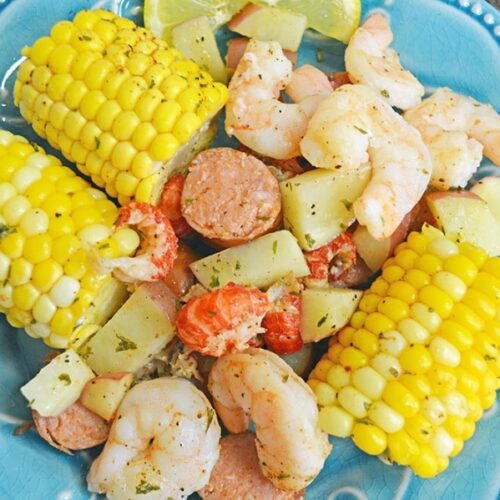