Living in an apartment it is near impossible to have enough space to do anything, especially when it comes to laundry. In this particular apartment, we made some sacrifices in order to be out of the city, surrounded by woods and have spacious rooms. And while most of the rooms are spacious, the bathroom and the kitchen are not.

To make it worse, the washer and dryer are actually in the bathroom. Not in a closet in the bathroom, but right there, against the wall as you walk in. Because of this, I have had to be creative when it comes to doing the laundry and folding clothes. Usually I would grab the clothes out of the dryer, toss them on the bed and start folding. It was actually something of a race between me and the cat to see if I could get all of the warm, clean clothes hung up before they became her napping place. The majority of the time I’d lose. Now, however, I have the HangerJack, and it has made my laundry life so much easier!

The HangerJack is actually a very simple invention, nothing more than a bar with a spring-loaded hinge that you attach to the wall and pull into a horizontal position to hang clothes on as you fold your laundry. Once finished, just push it back down against the wall where it is completely out of the way. When you pull the HangerJack up, it will securely lock into place. The bar has ridges in it that will hold one or two hangers a piece so the hangers don’t slide around, and it is capable of supporting up to 65 pounds! It is 24″ in length, which gives me plenty of room to hang all the clothes in a load. When you are ready to fold it back down, simply press the button on the underside to release the spring hinge and fold it back down. Who would have thought such a basic concept could be such a huge help! 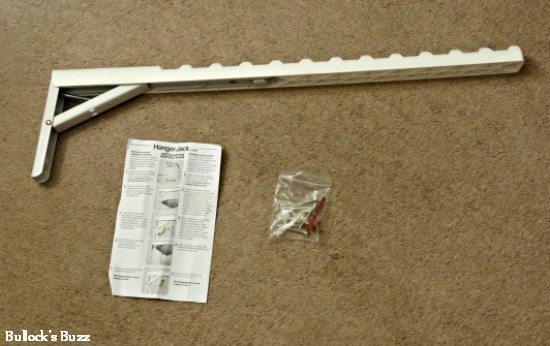 The HangerJack comes with everything you need to install, and it took maybe five minutes for my husband to put it up. He first marked the position for the holes, then inserted the butterfly anchors (we installed on a wall with no studs. It does come with instructions and parts for use in walls with a stud, too). Next he attached the HangerJack to the wall using the screws, and that was it. Finished! 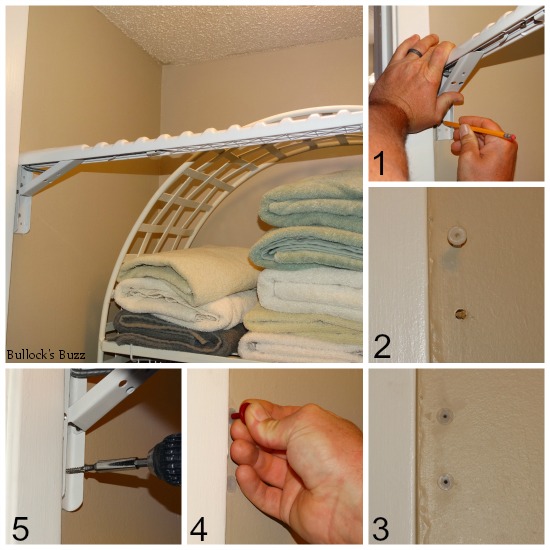 I picked the perfect place for it, right on the outside bathroom wall, on the other side of which is the dryer. Now I can simply pull the clothes from the dryer, place them on top, and either hang or fold each piece of clothing. It has literally cut my folding time in half, and made putting clean clothes away so much easier!

Of course the HangerJack can be used for plenty of other things as well. Use it in your garage to hang shovels or gardening tools, use it as a bike rack, use it as extra hanging space in your closet, or anywhere else you need to hang something. You can find the Hanger Jack either though the HangerJack website or on Amazon

There are so many people over the world struggling with same problem you have - over here it is typical to have similar situation even in a little older houses - all in same, and very small bathroom. So this kind of ideas are more than welcome!