Did you know that by the end of 2014, there will roughly be roughly 396 million idle or inactive mobile devices in the United States alone? Of those, only 80 million will be recycled. According to the United States Environmental Protection Agency, less than 20% of unwanted cell phones are recycled each year. The rest go in landfills or sit around people’s homes to later be improperly disposed of. Because of this, eWaste is one of the fastest growing problems in the world.

After moving into our new apartment, I realized we had way too much stuff. So I decided that before we move again, I was going to get rid of a lot of the items we no longer need or use. In trying to live a more green lifestyle, throwing the unwanted items away has never been an option. Instead, I aim to continue to teach our son the values of both helping others and recycling. Old clothes, furniture, toys, knick knacks and other items get packaged up to be collected by various charities such as The Salvation Army, Hannah Home and others. Any remaining items such as out of date papers and broken items get separated into the proper piles, and then taken to the nearest recycling bins. That leaves old electronic devices.

Like many, I love having the latest technology when it comes to my cell phone, tablet and other devices. I have several old cell phones just sitting in a drawer taking up space and collecting dust. I will admit that I am also guilty of having thrown away some of the first cell phones I ever had. Now, being more aware than ever of the growing eWaste problem, I prefer to not throw these devices away, but get rid of them responsibly. One way to do this, is to use one of those programs that offer to buy your old devices.

Of course there are plenty of those programs around, but with many of them you have to package the device, ship it off, then wait for weeks, if not months,  just to find out if they will even take it. If they do, you get to wait even longer to get your money. If they don’t, you can opt to let them dispose of it (hopefully to be recycled), or you can wait for it to be sent back to you to either be trashed or placed back in that drawer. It’s a long process, and oftentimes one that turns out not to be worth it. 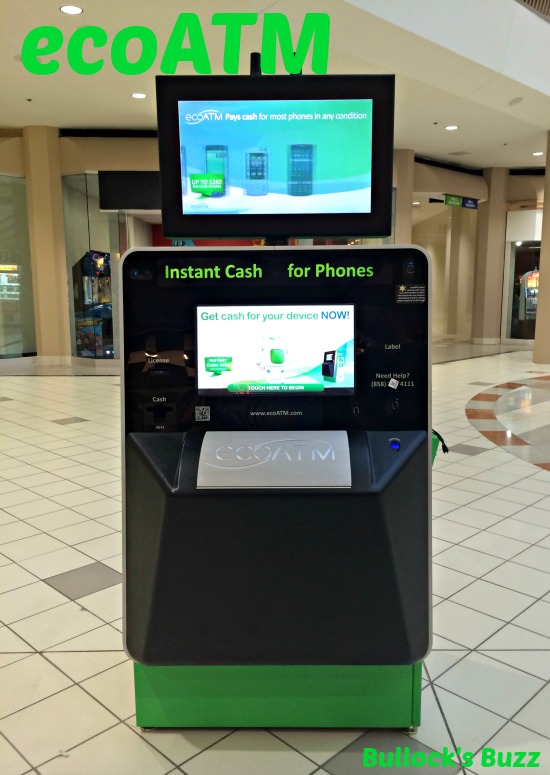 However, during our last trip to the mall, I remember seeing an ecoATM,  and I figured this was a great opportunity to show our son a more responsible way of getting rid of that drawer full of old devices.  At the same time, I am hoping he will also learn not to just causally throw something of value away. After all, at the time of purchase, these devices cost a fair amount of money, and I have to wonder what lesson I am teaching him by getting rid of the old ones once something newer and better has come along. If there is a chance to get some of that money back, I feel it is definitely worth trying. 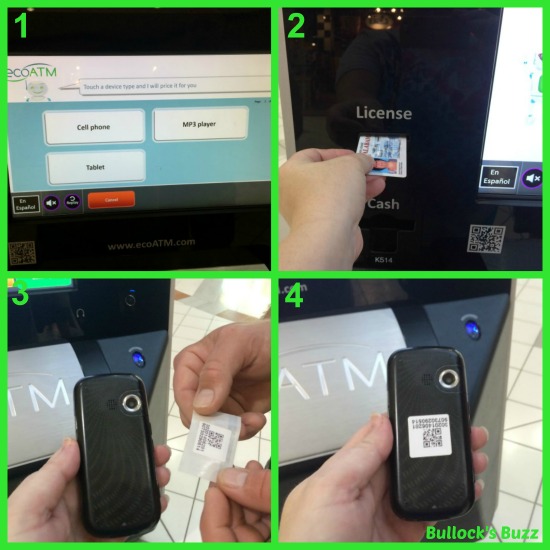 The ecoATM is the world’s first automated eWaste recycling station. It is perhaps the easiest and most convenient way to recycle your old cell phones, tablets and MP3 players and get paid cash for them, instantly. Like many eCycling companies, ecoATM prices each device based on its model, specific condition and its value on the secondary markets. So an older device may not get as much as a newer one, and a damaged device will not bring as much as one that is in good condition. ecoATM shops worldwide channels for the best prices they can find for your individual model. Their prices are actually quite competitive with other buyback services, and they accept more kinds of devices than most of their competitors. ecoATM is able to find a second life for about 75% of the devices collected. The remaining 25% are sent to certified eWaste reclamation facilities where the devices are responsibly reused and recycled. 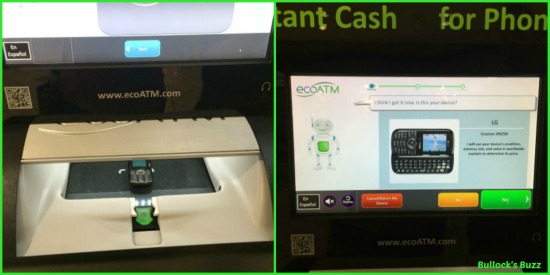 The entire process took a lot less time than I originally thought, and the ecoATM is quite easy to use.  Step by step instructions appeared on the touch screen to guide us through the process. In short, it basically involved presenting proof of identity, placing the device in the ecoATM’s test station so it can examine it, the ecoATM searching for the highest price they can find throughout a network of buyers, and then, if you accept the offered price, you get your money.

As I expected, the phones we brought with us were all too old to be worth anything. After we had gone through the process with the two newest phones and saw they had no monetary value, we went ahead and placed the rest in the slot on the side of the ecoATM that is there for those who are simply looking for a green solution to disposing of their old devices, whether they work or not. ecoATM will also recycle your cords and chargers for you, although you will not get any money for them. There is a slot for these on the other side of the machine. Also, some machines have a charging station so you can power your device on to show the machine that it works (this is not a requirement, but whether or not it works will make a difference in the device’s worth). 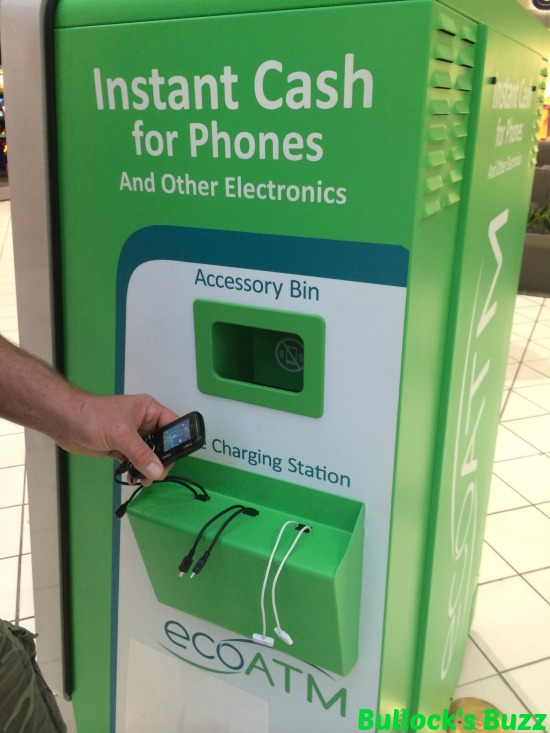 My son didn’t quite understand why we didn’t get any money, but I explained to him that as newer devices come out, older ones lose their value. I also pointed out that our main goal was to dispose of the devices in an eco-friendly way, and any money we may have gotten would have just been a bonus. I was okay with it because not only had our son had learned a lesson about responsibly disposing old devices, but I was walking away towards a home with with less clutter and a good feeling knowing I was doing my part  to keep the world a better, cleaner place for the next generations.

The first ecoATM appeared back in September 2009, and today has grown to more than 900 kiosks in malls and large retailers in 42 states. You can quickly search and find a location near you by using the ecoATM location finder on their website.

To learn more about the ecoATM, including the various security measures in place to prevent thieves from selling stolen devices, a detailed video of the entire selling process, and many more interesting facts, visit ecoATM online.

What are you doing with your old cell phones?