2019 update – it appears as though this product is no longer available.

Years ago the recipe book and the recipe box were a staple in almost every kitchen. Today, recipe readers are all the rage. If you love to cook but want an easier way to access, organize and store your favorite recipes, the latest Key Ingredient Recipe Reader HD+ tablet is exactly what you need! 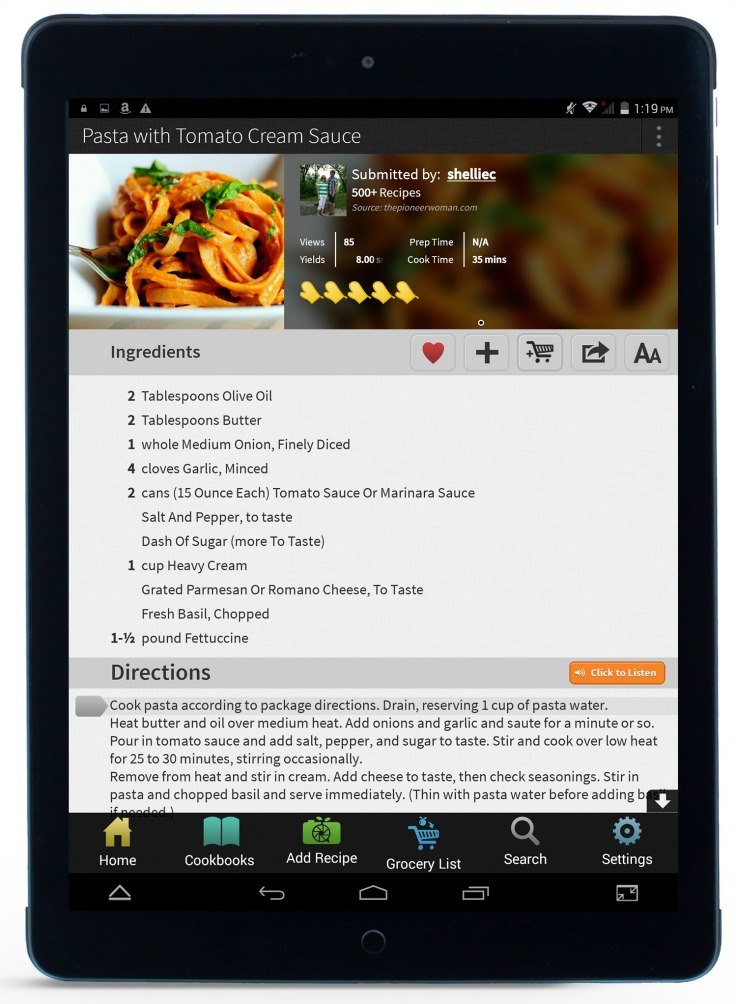 Back in 2013 I reviewed the original Key Ingredient Recipe Reader, which at the time was pretty neat for what it was. However, after trying the latest version, I have to say that the new 10″ Key Ingredient Recipe Reader HD+ is much, much better!  A vast improvement on the small, somewhat chunky original design with its tiny, 7″ screen, the Recipe Reader HD+ is thin, sleek, lightweight and powerful with a clear, crisp 10″ HD touchscreen display. Here are just a few of the specs at a glance:

The latest recipe reader in the Key Ingredient line not only enables you to store, organize and search millions of recipes with the touch of a finger, it also does so much more. In fact, it is a full-featured Android-based tablet specifically designed for use in the kitchen. And by specifically designed I mean it comes with a spatter proof, water-resistant and heat-resistant case, and touchscreen. So instead of having to risk your more expensive tablet or smartphone around the mess in the kitchen, you can simply mount the Recipe Reader HD+ and access it whenever you need. 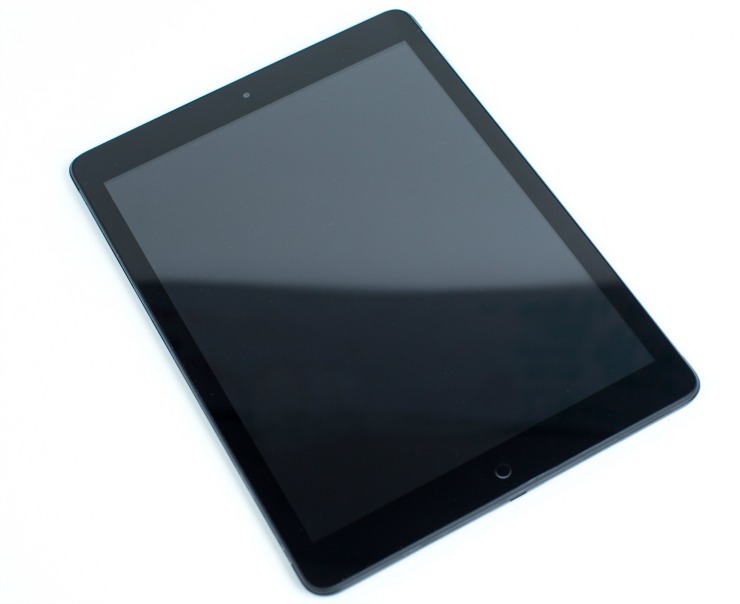 When you open the box you will find the 10″ Android tablet, a USB cord, a charging adapter, a pair of earbuds, an optional screen protector, and a User Manual and QuickStart Guide. While the sticker on the screen says to charge for 30 minutes before turning on, the instruction manual said to give it 2 hours. I decided to play it safe and go with the 2 hour charging time, and as soon as that time was up and I had it up and running, I was quite impressed. 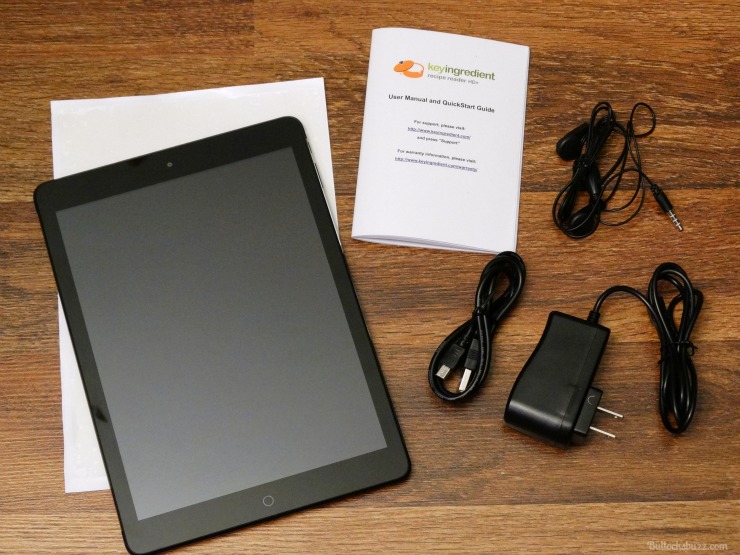 The Key Ingredient Recipe Reader HD+ tablet features a 2043 x 1536 pixel super bright touchscreen that is preset to stay ‘awake’ for 4 hours so you don’t have to worry about the display cutting out while you are in the middle of following instructions for a recipe. Of course, you can easily adjust this to your own needs. 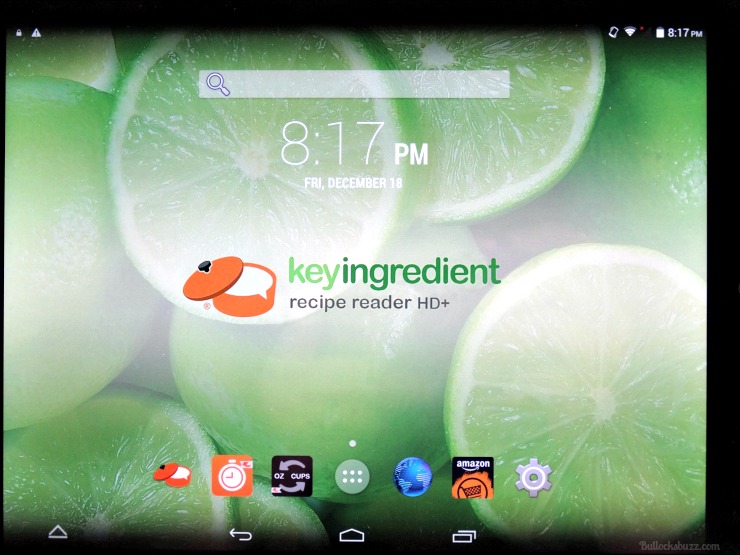 A rear-facing 13 MP camera allows you to take photos of your favorite recipes that you can save in the app thanks to the RecipeSpan service, and there is also a front-facing 8MP camera. The power and volume rocker is located along the top right edge of the reader just below the rear-facing camera. And a 3.5mm headphone jack for the included earbuds plugs into the port that is located along the top edge. 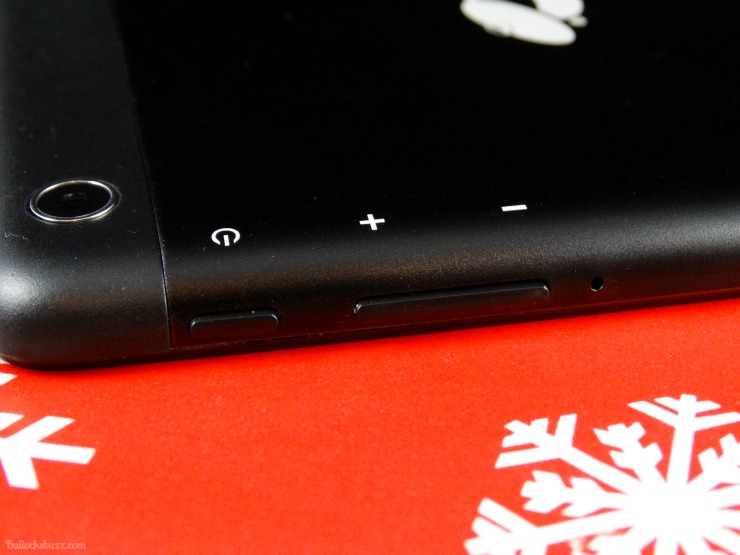 Along the bottom edge is the left and right stereo speakers, and between them is the micro-USB charging/data port. Speaking of charging, the tablet comes with a 3.7V 6,000mAh battery, but how long it lasts will, of course, depend on how you use the tablet. As with any tablet, the graphics, the processor, the speakers, WiFi, Bluetooth, and everything else will affect the battery’s charge. I’ve had no problems with it lasting up to 8 or 9 hours with light use and standby mode, and around 2.5 to 3 hours with moderate to heavy use. Of course, since the tablet was designed to be kept in the kitchen and used as a recipe reader, the battery is more than powerful enough and lasts much longer than typical use would require. Plus, if you are planning on cooking large meals for the holidays or other special occasions, you can always set it up or mount it near a power outlet and use the provided adapter if needed. 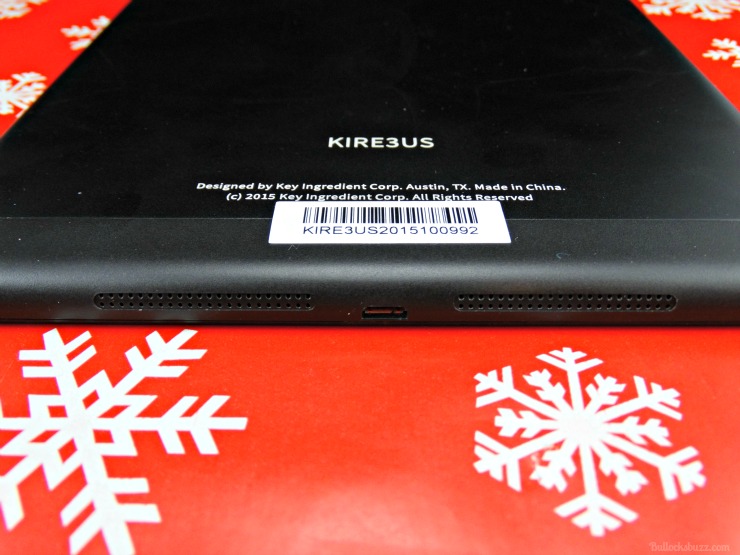 The Key Ingredient Recipe Reader HD+ also has a removable back cover that allows you to access the microSD slot and SIM card slot. To access the slots, pull from the very top towards you with the back facing you and the plastic cover should open easily exposing the two slots shown above. The entire back will not come off, just the top inch or so (you can see the seam). I’ve read that the device will take a SIM card, recognize it and work at up to 4G speeds. It also comes with a SIM Toolkit app pre-installed for those that want to add an active SIM. 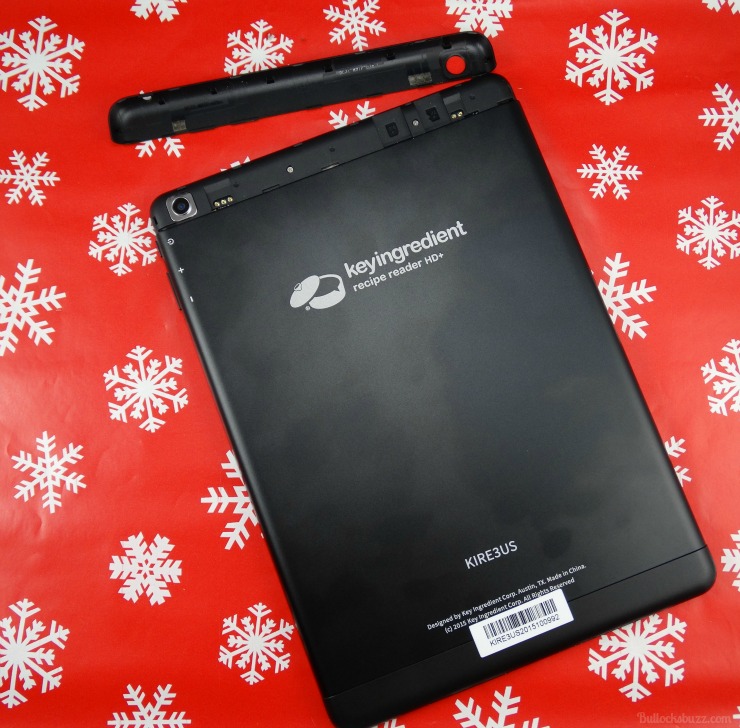 The tablet is running on a customized Android Amazon App Store interface which mean that instead of having access to the Google Play store as you would with a typical Android OS, you instead have access to the Amazon Underground App store. While this may seem strange, it is in no way a deal breaker – at least for me – as you can install and use other apps from the Amazon app store as you see fit. 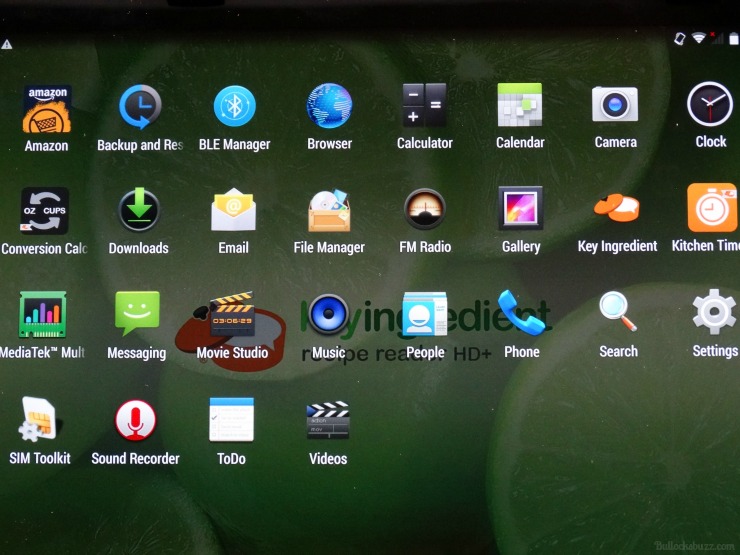 The Key Ingredient Recipe Reader HD+ also comes with a Tri-Stand that fits conveniently in any nook of your kitchen, or you can use the included mounting plate to hang it from the upper cabinets or on the wall. The weighted reader stand is very stable when standing, and holds the tablet securely in place. You can also rotate the tablet a full 360 degrees while it is secured in the stand. 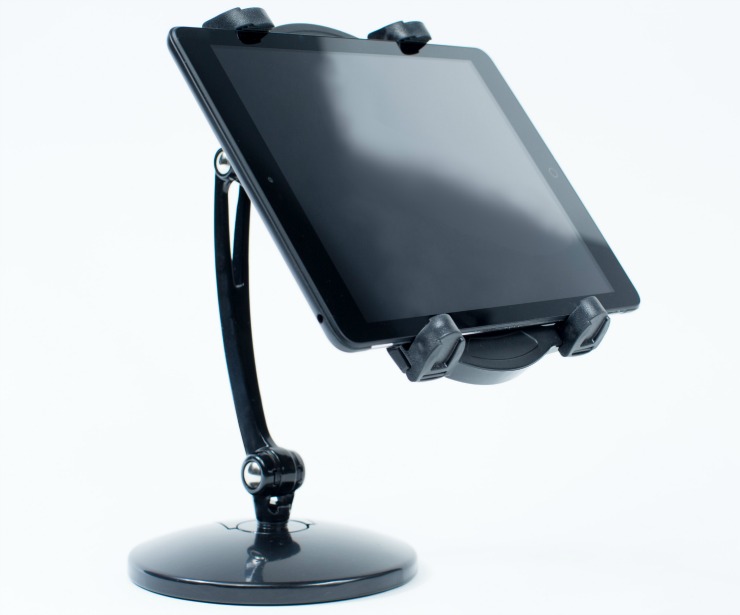 The Recipe Reader HD+ comes pre-loaded with the Key Ingredient Recipe App which features 1000 amazing recipes already preloaded. However, once you sign up for the free Key Ingredient online cookbook account, you’ll also have access to over 2 million more recipes, the ability to add your own, the ability to sync, and much more! Here’s just a small sampling of the type recipes you can find:

You can also easily and quickly upload your own recipes that you have stored on your computer or tablet, or recipes from your favorite websites, so you have immediate access to them. Using the Key Ingredient app, you can organize your favorite recipes either by category, such as main dish, appetizer and dessert, or by key ingredients, such as chicken, fish, meat, pasta, etc. You can also add recipes to your “favorites’, save them into cookbooks that you create and name, access them offline, and even share via social media with your friends and family. Whenever you are ready to access one of your cookbooks or “favorites”, just turn your Recipe Reader HD+ on, click on the app, and they will be right there! 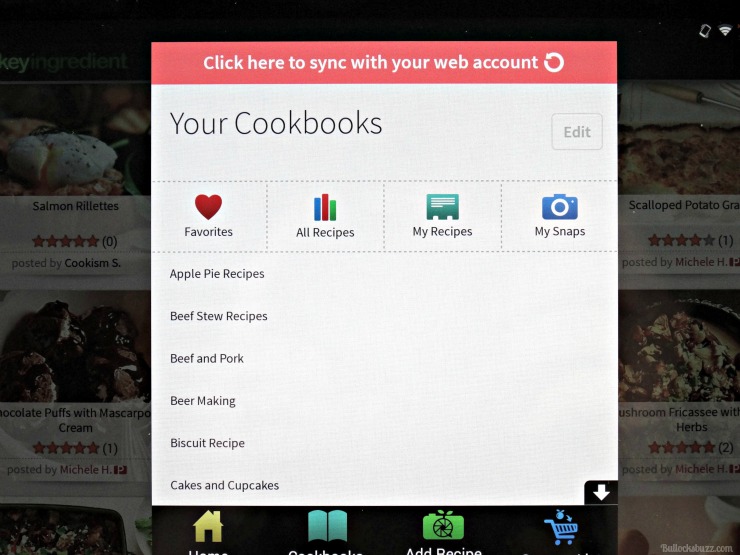 While anyone can download the Key Ingredient Recipe App on their device, only this brand new model Recipe Reader gives owners access to exclusive apps and perks including:

The Text-to-Speech Recipe Reading happens to be one of my favorites! Now whenever I’m in the middle of making a recipe and I don’t have the time to keep looking back and forth between what I am doing and the screen, I can have the tablet can read the recipe aloud with the simple touch of a button. The recipes are read nice and slow, and if you miss a step or want to skip ahead, you can move the ‘slider’ to the part you want to hear. The only drawback is that it is hard to hear the mono-tone, robotic sounding voice when you’ve got all of the sounds inherent to a busy kitchen environment, but I’ve found an easy way around this: pair the tablet with a Bluetooth speaker!

In addition to all of the handy things the Key Ingredient Recipe app enables you to do, there are also several other pre-loaded apps including the Kitchen Timer app which supports multiple count-down timers which can be used at the same time. This really comes in handy when cooking a large meal that has different cooking times for each individual recipe. The Conversion app quickly and easily converts common cooking units into other units such as cups into ounces. There’s also an FM radio app so you can listen to your favorite station while cooking.

Exactly How Good Is The HD Recipe Reader?

The display is clear and crisp with great resolution, and even the camera offers great resolution and white balance.  I also love the size. Size-wise the Recipe Reader HD+ is just about one inch smaller than my iPad, and its large screen is so much brighter and easier to see than the original Recipe Reader. As far as speed, I can’t complain at all. The touchscreen is quickly responsive, apps openly and run quickly and smoothly, and even movies and music stream without any lag. In short, I love it!

The current price (2015) for the Key Ingredient Recipe Reader HD+ is $199 shipped, and that also includes the stand plus a 1-year guarantee. For that price you are not only getting a very capable, full-service tablet, you are also getting your very own “virtual recipe box”! This innovative recipe reader can be purchased through Amazon (affiliate link – no extra cost to you!). You can also find all sorts of wonderful recipes on The Key Ingredient website.

Please note that the information that you have given about ordering the kitchen snap key ingredient does not exist on their page only recipes. They have no electronic devicese that can be purchased on the wbesite. How do I find the product to purchase.

Hi James! Thanks much for letting me know! It's been almost 4 years since I did that review, and I haven't worked with them since that year. I am totally surprised that it looks like they are no longer making it. I love mine, and I'm curious to know why they stopped! It looks like the original one is still available on Amazon, but this version was MUCH better. Again, thanks for letting me know, and I am sorry I can't help you more. I will update the post letting people know it appears as though that product is gone. Warmly, Alaina